Celebrating 30 years of Swiss Made in America

(Every) Now and Then is a retrospective exhibition that represents 30 years of art and music by San Francisco icon and Swiss born artist, Roman Weingartner, but more widely known as ROMANOWSKI.

The show will highlight the artist’s deep diversity in a wide range of mediums and practices, from assemblage, wood-work, stencils, sculpture, painting, photography, “mattress bombing,” music production, and turntablism.

Since his arrival in the U.S. in 1988, he has nurtured his many crafts, while garnering attention from likeminded artists both visual and musical for his originality. Romanowski has collaborated with many other well-known artists such as, Mars-1, Doze Green, Nome Edonna, Damon Soule, Brian Barneclo, David Choong Lee and Daniel James Burt. His musical collaborations are also extensive with artists such as Quantic, Tommy Guerrero, DJ Smash, Walter Earl, J. Whitfield, PEACE (Freestyle Fellowship) and more.

His musical inspirations are so vast and varied he’s aptly dubbed his sets “All Styles, All Smiles”.

View cart “Quilted Stuffed Fish” has been added to your cart. 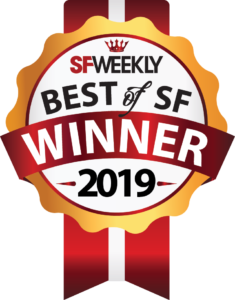